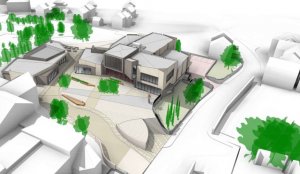 Daventry District Council (DDC) has, this week, unveiled plans to build a new cinema with restaurants in Daventry Town centre by 2020.

DDC have advised that they will be progressing the new Mulberry Place cinema development on land north of High Street and are inviting residents to have their say on the proposals during a public consultation later this month.

Willmott Dixon have been working alongside DDC on the design as well as architects Marchini Curran Associates on the £8.2m cinema development. DDC will be asking businesses, residents and community groups to give their views on the proposals before submitting a planning application later this Autumn.

The consultation will run from Monday 15th October until Sunday 28th October, with opportunities to view and comment on the plans during a series of open events at Daventry Library in North Street at the following times:

Alternatively, the proposals can be viewed online, and a questionnaire completed here from Monday 15th October 2018.

Daventry Town Council strongly encourages all businesses, residents and community groups to read through the proposal thoroughly and put forward your views and comments.

The closing date for comments is Sunday, 28th October 2018. Displays of the proposals will also be available to view in the library and DDC's Lodge Road offices during the consultation period.

DDC is also working with Northamptonshire County Council Libraries Service to progress the Daventry Library relocation to the Abbey by April 2019. This scheme does not need planning permission but building regulations will need to be approved before work starts in the New Year on transforming the ground floor into modern new library premises.

DTC have no comments to make on either the proposed cinema build or the relocation of the library at this time.