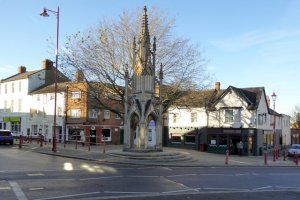 People in Daventry town are being encouraged to suggest possible names for a proposed new unitary council covering West Northamptonshire.

The Government has not yet decided on whether to proceed with the unitary proposal and is expected to launch its own consultation shortly before making a decision. However due to the tight timescale for creating the new councils by May 2020 if the proposal is approved, Daventry District Council and its partner councils in the west are continuing with preparations to help inform and shape any future legislation. This work includes proposing a name to the Government for Parliament to decide upon.

Residents and businesses in Daventry town are urged to give their views on what they think a new west unitary council should be called during an informal consultation running until Monday, 3 December.

They are being asked to respond to the following question: What do you think a new Council covering West Northamptonshire should be called?

They can submit their suggestions online at www.daventrydc.gov.uk/consultation

Alternatively they can submit their suggestions by post to:

What is the background to this?

The Government is currently considering a proposal to create two new unitary councils in Northamptonshire, in place of the county council and the current seven boroughs/districts.

The Government has not yet made a decision on the unitary proposal, however if it does decide to proceed with it, then as part of legislation names for the new authorities will need to be proposed for Parliament to decide.

Tell us what you think

We would like to give the Government a preferred name to consider for a new west unitary authority, so would like to hear your views on what you think it should be called.

This is an informal public consultation which will help us to shape a name to share with Government and Parliament.

We need your views by Monday, 3 December 2018 to ensure we meet the Government's anticipated timescales, if it decides to proceed with the unitary proposal.

What are the choices for the name – or can I suggest anything?

There is no official shortlist, but various names have been suggested since discussions started about a proposed new unitary authority for West Northamptonshire.

We have listed some of these below and we would be keen to find out your preference or suggest to us an alternative name:

• Borough and District of Northampton Council

Here are some things you may like to consider when suggesting a name:

• There may well be a future proposal to create a Northampton Town Council alongside the proposed new authority, in the same way as there is already a Daventry Town Council and Brackley Town Council

• Does the name reflect how you identify with the area as a local resident or business.

• Do you think the name reflects a sense of place to people outside the area, such as visitors, businesses or potential investors

• Whether or not you think the new name should be totally different to the names of any of the current councils.

• Could the name shortened or simplified in a way that it could lead to a loss of place identity.

Is this a chance to influence whether or not this proposed new council goes ahead?

No. This informal consultation is being carried out so that Daventry District Council can gauge the views of its residents on what they think a new authority should be called if it is established by the Government.

Your suggestions will be fed back, along with the views of those living in Northampton Borough and South Northamptonshire, who will also be consulted by their respective councils over proposals for a new name.

So how can I have my say on whether or not this proposed new council is a good idea?

The Government is due to carry out its own consultation on the bigger question of whether the proposed new councils go ahead, so if you have a view on that, we would encourage you to take part in that separate consultation as and when it is launched, which we understand may be in October or November 2018. When details of that formal Government consultation are known, we shall make details widely available.

Why is this an 'informal' consultation?

This is an informal consultation on a possible name because the decision on the name for that council (if it is ultimately formed) is not something that any of the four current councils can decide. The decision on the name for the proposed new council for the western part the county will instead be for the Government to propose and for Parliament to decide. We however can share our views with the Government, and later with Parliament, to help inform their decision.

That is why we are carrying out this informal public consultation on the name now – so you can tell us what you think. That will help inform our views, which we will then share with Government and Parliament.

What is the timetable for being able to influence the name, if it does all go ahead?

We need your views please by Monday, 3 December 2018. The reason for that timetable is that we think the if the Government decides to go ahead with this proposal, after having carried out their formal consultation still to come, it would publish important technical documents sometime before Christmas or in early 2019 that will go on for Parliamentary consideration. Those technical documents would likely contain names for the two new proposed councils, including the one for our part of Northamptonshire, so it is important that we feed in any strong views on the name before those technical documents are finalised and published.

How do I make my suggestion?

Please respond to us by answering the following question:

What do you think a new Council covering West Northamptonshire should be called?

You can submit your respond online at www.daventrydc.gov.uk/consultation

Alternatively you can write to us at: