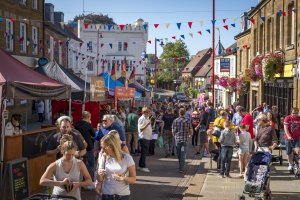 "The busiest I've ever seen Daventry" – that was the word on the High Street at Daventry Food Festival on Saturday 21st September. Blue skies and a diverse display of stalls drew the crowds to the town centre for the festival, which is funded and organised by Daventry Town Council.

Mayor of Daventry, Cllr Mike Arnold, got proceedings underway just before 11am, followed by a mouth-watering cookery demonstration from celebrity chef Patti Sloley. As midday approached, High Street and Sheaf Street filled with people seeking out something delicious for lunch – and the festival remained busy and buzzing all day long.

An eclectic mix of more than 50 traders did a roaring trade, offering everything from pies to prosecco, cakes to curries, with ice cream and summer cocktails proving particularly popular thanks to the glorious weather.

There were also many local organisations in attendance, including the WI, NCFWI Climate Change Ambassadors, Green Acre, PECT and Low Waste Living Daventry. Daventry Food Bank was in attendance too, and received many kind donations of food and funds from visitors and traders alike.

Turned Out Nice, a Daventry-based business selling bespoke chopping boards, said: "Daventry was heaving for its Food Festival, the sun was hot, hot, hot and people came out to eat, drink and generally enjoy themselves.

"I applaud Daventry Town Council for its organisation, its team was helpful and friendly and we had a brilliant day's trading."

The Mayor enjoyed his day in the sun, adding: "The festival was excellent from start to finish. I thank everyone involved, including the hardworking staff and members of Daventry Town Council, Juice Productions, the stewards from New Age, compere Peter Wyllie and of course all the amazing traders who made the day a huge success."