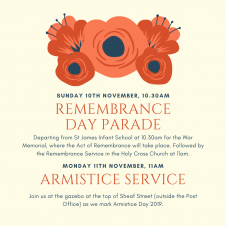 The Royal British Legion Remembrance Day Parade and Service will take place in Daventry on Sunday 10th November, 2019. The parade will commence at 10.30am at St James Infant School, proceeding along Tavern Lane, the High Street and Abbey Street before finishing at the War Memorial where a short service will be held to include the calling of the Roll of Honour and laying of wreaths.

Members of the public are also invited to attend a Remembrance Day service at the Holy Cross Church after the parade, led by Daventry Churches Together.

The parade will be led by the Liberty Drum Corps, with Town and District Councillors and Civic Dignitaries joined by organisations and community groups from across Daventry.

Cllr Mike Arnold, Mayor of Daventry said, "Each year, Daventry's Remembrance Parade and Service is attended by hundreds of people, including veterans, serving personnel, uniformed organisations, civic dignitaries and members of the public. It is as important as ever to remember those who have served our country and the sacrifices made by so many."

On Monday 11th November at 11am, a short service will also take place to mark Armistice Day at the brick gazebo at the top of Sheaf Street, outside the Post Office.