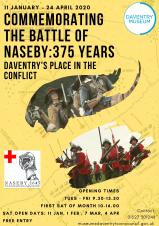 The first exhibition of 2020 at Daventry Museum commemorates 375 years since the Battle of Naseby and Daventry's Place in the Conflict.

On the morning of 14 June 1645, parliament's Newly Modelled Army destroyed King Charles I's main field army at Naseby, the decisive battle of the first English Civil War. Nights before this, King Charles stayed at Daventry's Wheatsheaf Inn and his Royalist forces used Borough Hill as a base before marching to fight at Naseby.

Daventry Museum's exhibition Commemorating the Battle of Naseby: 375 years. Daventry's Place in the Conflict is a first for the museum's collaborators The Naseby Battlefield Project (NBP) and the first of a number of activities planned by the Project in the run up to the anniversary in June 2020. Many items in the exhibition will be on display for the very first time from lenders who are patrons and trustees of the NBP.

Exhibits include articles such as original armour, swords and cannon balls found on the battlefield, plus contemporary paintings of soldiers and views of the battle itself. Highlights include loans from The National Civil War Museum in Newarke such as Fairfax's campaign cup and water bottle given to him by Cromwell and a lobster pot helmet complete with 'battle scars' from the Naseby conflict, plus the Naseby Papers captured from the King's baggage train. Weaponry, silk standards and replica costumes, accompanied by the sights and sounds of a battle re-enactment will immerse visitors in the rich history of the turbulent 17th century Civil War.

During the exhibition there will be special evening and Saturday open day talks given by Civil War historians (check social media & further PR for details). We are also hoping to welcome Sealed Knot reenactors along to the first open Saturday on the 11th January.