Commemorating The Battle Of Naseby: 375 Years. View Our Virtual Exhibition. 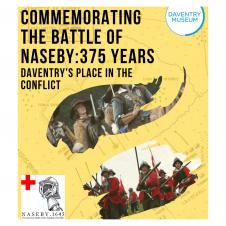 On that morning in 1645, parliament's Newly Modelled Army destroyed King Charles I's army at Naseby, the decisive battle of the first English Civil War. Only nights before this, King Charles stayed at Daventry's Wheatsheaf Inn and his Royalist forces used Borough Hill as a base before marching to fight at Naseby.

Daventry Museum's exhibition Commemorating the Battle of Naseby: 375 years. Daventry's Place in the Conflict was a huge success, welcoming large numbers of visitors before the museum and council offices were temporarily closed back in March due to the Covid-19 pandemic. It was a first for The Naseby Battlefield Project (NBP), who do not currently have a museum space or touring exhibition. Sadly all of the anniversary plans made by NBP and reenactors from The Sealed Knot, have been shelved due to the pandemic, although it's hoped that socially distanced tours of the battle site will recommence in the late summer.

Despite the museums closure this wonderful and much enjoyed exhibition can still be viewed via a 360-degree virtual tour to be found on the Museum's website on the What's On page:

The tour features labels and information on many of the items and also those in the museum's permanent collection; in fact it's like you are actually there taking a leisurely walk around the award winning museum, but from the comfort of your own home!

The tour was put together by Museum Officer Carrie Gardner-Pett prior to the museum's closure and it has been featured on BBC Radio Northampton's John Griff Sunday show and several national website collations of virtual museum tours.

It's a huge shame that this important anniversary has been so badly affected by the events of this year, but Daventry Museum hopes that this exhibition, which was so loved by those who visited before it was closed, will go some way to marking this historic oc