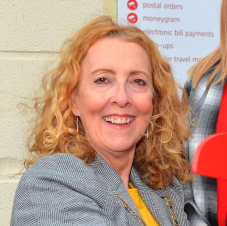 Following Daventry Town Council's Annual Town Meeting on Thursday 28th May 2020, Cllr Lynne Taylor was elected to the position of Mayor of Daventry for the Council Year 2020/2021.

Cllr Lynne Taylor has been a Councillor for Daventry Town since 2003, initially being voted via co-option as Councillor for Drayton Ward, 17 years later, she is very much an integral part of the Town Council and in her role as Mayor a knowledgeable and experienced Councillor and representative of Daventry Town.

Having been a previous Mayor and serving the past year as Deputy Mayor she is more than qualified for the position, Cllr Taylor has a great understanding of the responsibilities that come with the role and is up for the challenge. Cllr Karen Tweedale joins Cllr Taylor as the Deputy Mayor.

Cllr Lynne Taylor has passionately stated: "My dream for Daventry is to see us to continue to grow as a community. Progress and change are inevitable and as a Town Council, our responsibility is to ensure that the residents views continue to be heard. We cannot be complacent in what we are doing. With 'unitary' around the corner, it is an opportunity for the Town Council to take on even more services. We are ready, willing and able.

The Mayor has previously attended community events to help promote and raise awareness of local charities and organisations, however as many events have been cancelled or postponed, the Mayor would still like to help raise awareness of any activities via the Town Council's social media pages.

If you would like the Mayor to learn more about your organisation or charity, please email comms@daventrytowncouncil.gov.uk.

Should you be lucky enough to be able to organise an event, the Mayor would love to attend (as long as it is safe to do so) a Mayoral Engagement Form is available to download from www.daventrytowncouncil.gov.uk or contact the office on 01327 301246.