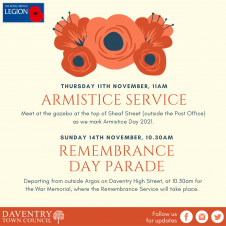 The Royal British Legion Remembrance Day Parade and Service will take place in Daventry on Sunday 14th November 2021. The parade will commence at 10.30am outside the Argos store on Daventry High Street. The parade will then proceed along the High Street to Abbey Street before finishing at the War Memorial where a short service will be held to include the calling of the Roll of Honour and laying of wreaths.

Members of the public are also invited to attend a 11.30am Remembrance Day service at the Holy Cross Church after the parade, led by Daventry Churches Together. Due to the ongoing pandemic the church will be restricting numbers and have requested everyone wear a face covering on entering until seated.

The parade will be led by the Parade Master with Councillors and Civic Dignitaries joined also by organisations and community groups from across Daventry.

Cllr Karen Tweedale, Mayor of Daventry we will be in attendance and said:

"We are honoured to once again host the Remembrance Parade after it's Covid hiatus last year, as it is important as ever to remember those who have served our country and the sacrifices made by so many."

On Thursday 11th November at 11am, a short service will also take place to mark Armistice Day at the brick gazebo at the top of Sheaf Street, outside the Post Office.