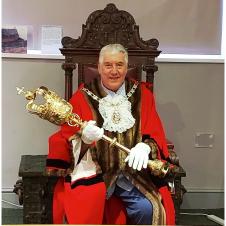 Following Daventry Town Council's Annual Town Meeting on Monday 23rd May 2022, Cllr Malcolm Ogle was elected to the position of Mayor of Daventry for the Council Year 2022/2023.

Cllr Malcolm Ogle has been a Councillor for Daventry Town since 2017 and having served this past year as Deputy Mayor he will bring a great deal of knowledge, experience and understanding of the responsibilities that come with the role.

Malcolm moved to Daventry from Weedon in 1977 and has served our community as both a Group Scout Leader and controller for Daventry RAYNET. Malcolm's working life was spent locally as an electrician and after his retirement is now enjoying a fulfilling role as a volunteer minibus driver for Age UK Northamptonshire and Daventry Area Community Transport (DACT) transporting elderly people to day centres.

Cllr Malcolm Ogle said: "I am honoured to be appointed as the new Mayor of Daventry and thankful for the privileged opportunity. I look forward to supporting Daventry Town Council in its focus on responding to the needs of our community. I am very excited to attend and meet residents at the many wonderful DTC organised events coming up."

The Mayor attends community events free of charge. If you would like the new Mayor to attend one of your events, a Mayoral Engagement Form is available to download from www.daventrytowncouncil.gov.uk or contact the office on 01327 301246.