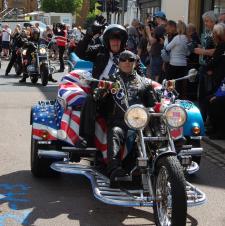 On Saturday 11th June 2022, one of the most popular events in the Daventry diary returned as the town hosted Daventry Motorcycle Festival.

The free family friendly festival attracted large crowds, who came out to enjoy the sunny day. Alongside the brilliant display of bikes, trikes & scooters, there was also an array of live music, a stunt show, various children's entertainment, a show & shine competition, traders, exhibits and tasty food and drink to be sampled.

As is tradition, the Motorcycle Festival began with a ride-in of over 400 vehicles, led by Daventry Mayor, Cllr Malcolm Ogle. He said:

"It was a privilege to lead the ride-in and officially open Daventry Motorcycle Festival 2022. The turnout was brilliant and was great for the town to have so many visitors. It was lovely to spend the day meeting members of the public, stall holders and the many motorcycle owners who brought their bikes to display at the festival. A big thank you to the organisers and team of volunteers for their dedication and hard work in making this fantastic Daventry event a big success once again. Also, thanks are needed to the post event clean-up team including the Air Cadets.

The popular event attracted many visitors, which had clearly been missed after a 2 year hiatus due to the pandemic.

Additionally, at this year's event, Daventry Town Council in Partnership with Northamptonshire Police offered a free Bicycle Marking Service to individually stamp bikes to help identify owners and help protect them from theft. The Bike Marking Scheme funded by Daventry Town Council and rolled out by the Daventry Neighbourhood Policing Team, was a big success with many bicycle owners taking up the free offer.