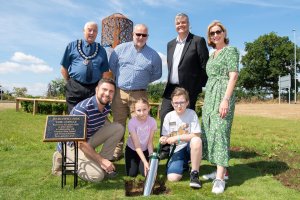 As part of a collaboration with Daventry Town Council and Daventry Museum, Orbit Homes organised a competition for primary school children in Daventry, which asked them to draw a picture or write a newspaper report about what they think life will be like in 100 years' time.

The winning entries were placed in the time capsule, which will be sealed for a century and not opened until 2122. The winners were chosen by a panel of judges from Orbit Homes and Daventry Town Council based on their creativity and the imaginative ideas they had suggested.

The winning entry was from Year Five student, Eloise Long, at Danetre and Southbrook Learning Village (DSLV), with the runners up being Year Six student, Gracjan Domanski, from DSLV and Year Two pupil, Jesse Goodwin, from St. James Infant School.

Their visions of the future included flying cars, teleportation and money growing on trees.

Group director of Orbit Homes, Helen Moore, and the Mayor of Daventry, Cllr Malcolm Ogle, visited Micklewell Park on Saturday 6th August to present the pupils with their winners' certificates, alongside representatives from Daventry Museum.

All three pupils had their handprints placed in cement above the time capsule's location and a commemorative plaque was placed at the site, with instructions to open the time capsule in 100 years.

Helen Moore, group director of Orbit Homes, said: "The burying of the time capsule at Micklewell Park celebrates Daventry's past, present and future, which is so relevant as we ourselves deliver a new chapter in the town's history through our development. The competition entries we received were brilliant and gave local children a unique opportunity, not only to showcase their ideas of what the future may hold, but also to make their own mark at Micklewell Park by leaving their handprints for posterity. As this was the first community event we have held at Micklewell Park, it was great to see a mix of our own residents and people from the local area."

Cllr Malcolm Ogle, Mayor of Daventry, added: "It has been a pleasure for the Town Council and Daventry Museum to be involved with this collaborative project with the team at Orbit Homes and to co-ordinate the competition with local school pupils. One of the highlights for me was judging the competition entries with Helen Moore and the council's Projects Officer Carrie Gardner-Pett. We were so impressed with the creativity, imagination, care and thoughtfulness of the entries. The event to bury the time capsule at Micklewell Park was a fitting celebration of those fantastic competition entries and I enjoyed meeting and chatting to many residents who attended. It was also great to see the winning and highly commended entries plus information about the site back at Daventry Museum later that day!"

All the competition entries were displayed at Daventry Museum in an exhibit about Micklewell Park, which included drone video footage of the site as construction was starting, an animated flythrough video of how the development will look once its finished, a site plan of the new homes being built along with images of the new show homes that are now open to the public.

Sophie Good, Development and Liaison officer at Daventry Museum, commented: "It has been lovely to have the opportunity to display the wonderful time capsule competition entries in the museum for the all the community to see, and to share information about the Micklewell Park development, a new chapter in the town's history. We've also enjoyed selecting items to include within the time capsule, with a view to what future generations will think of the year 2122."