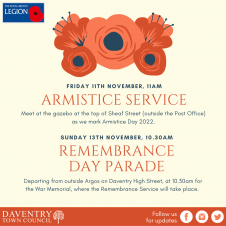 A Royal British Legion Remembrance Day Parade and Service will take place in Daventry on Sunday 13th November 2022. The parade will commence at 10.30am outside the Argos store on Daventry High Street. The parade will then proceed along the High Street to Abbey Street before finishing at the War Memorial where a short service will be held to include the calling of the Roll of Honour and laying of wreaths. Traditionally crowds gather around the War Memorial for the short service and take part in a two-minute silence at 11.00am.

Members of the public are also invited to attend a 11.30am Remembrance Day service at the Holy Cross Church after the parade, led by Daventry Churches Together.

The parade will be led by the Parade Master with Councillors and Civic Dignitaries joined also by organisations and community groups from across Daventry.

Cllr. Malcolm Ogle, Mayor of Daventry we will be in attendance and said:

"Remembrance Day is always a very important time for the people of Daventry and we welcome the opportunity for the town to pay our respects to our fallen heroes. We hope residents can join us for the upcoming parade as we honour those who made the ultimate sacrifice for our country."

On Friday 11th November at 11am, a short service will also take place to mark Armistice Day at the brick gazebo at the top of Sheaf Street, outside the Post Office.