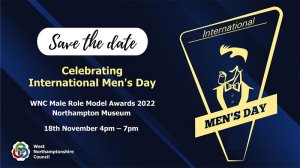 Men and boys who have made important contributions in West Northamptonshire are to be recognised in the WNC Male Role Model Awards 2022.

Organised by West Northamptonshire Council (WNC), the awards aim to raise awareness around men's well-being and celebrate those who inspire and have a positive impact on the lives of others in the community or the workplace.

WNC are looking for men who have been inspirational in the broadest sense and would like to know how they have inspired you or others, what they have achieved, or what they have done to help you or your community.

Nominations opened on Monday 3 October and close on Sunday 6 November. The finalists will be announced at an awards ceremony which will take place at Northampton Museum on International Men's Day on Friday 18 November 2022.

"There are so many men playing hugely important roles across West Northants communities and workplaces.

"However, we cannot recognise these individuals without the help of residents who know and work with them closely, so we are calling on you to help!

"What we're looking for is not only someone who goes that extra mile, but that person who has made a real difference to those around them and helped to support their community and nurture the next generation of young men.

"It could be a family member who has been a rock during a challenging time, a neighbour who has set up a community group to support local children, or a friend who has campaigned for better healthcare – nominate your role model now!"

International Men's Day (IMD) is celebrated around the world, and in the UK focusses on the core themes of making a positive difference to the wellbeing and lives of men and boys, promoting a positive conversation about men, manhood and masculinity and raising awareness of charities supporting men and boys' wellbeing.

For more information about the WNC Male Role Model Awards 2022 and to make a nomination, please visit the link below.