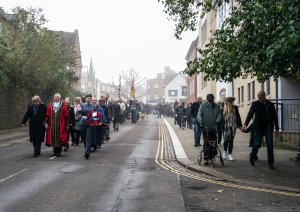 On Remembrance Sunday (13th November 2022) Daventry Town Council and the Royal British Legion paid tribute to those who have nobly served their country at this year's Remembrance Parade.

Crowds gathered to pay respect to the men and women who lost their lives in two world wars and later conflicts. Led by a Parade Master and followed by Councillors and Civic Dignitaries plus various Daventry based organisations and community groups, the parade made its way from Daventry High Street, along Abbey Street before finishing at the War Memorial.

At the War Memorial a short service was held by Reverend Dawn Stokes of Daventry Churches Together. The service included the calling of the Roll of Honour and laying of wreaths by standard-bearers, cadets, veterans, armed forces personnel plus representatives of local schools and organisations.

Cllr. Malcolm Ogle, Mayor of Daventry was in attendance and proudly remarked:

"It is an honour to be a part of the Remembrance Parade alongside the wonderful people, clubs, schools and organisations of Daventry who help make it such a poignant occasion. We must always remember the people who selflessly protect our nation. It is hard to quantify the gratitude the town has for the service personnel, particularly those that did not come back."

Thank you to all who participated and attended this Daventry Town Council funded and organised parade.